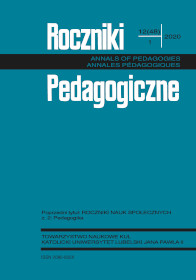 The purpose of this article is to present the modern usefulness of father Jacek Woroniecki catholic educational ethics. The modern human, entangled in obtaining and gathering the material goods, as well as psychical and social ones, loses what is continuous and stable and collects what is transitory with its continuous change. The human loses the foundation for solid construction for instability and uncertainty. The 70th anniversary of father Jacek Woroniecki farewell, the great educator of Polish intelligence, is a perfect occasion to rise the reflections upon modern human that lost the ability to distinguish what is worth worshipping and admiring and what could be or even should be pushed away.

With the use of the analytic-synthetic method a choice and interpretation were made of the Dominican notion, which constitute a prerequisite to upbringing actions. The first thought: “The significant trait of the human actions […] is the conscious purposefulness.” The second thought: “[…] in our every action […] a few forces participate, fulfilling appropriate role.” The third thought: “[…] only this ethics is good and true, which […] teaches not only about the good and bad actions but also about the continuous predispositions, virtues and faults.” The fourth thought: “Everybody has appointed dose of excellence.” In the father’s Jacek Woroniecki concept, there is the depicted human’s potential. On the other hand, the contemporaneity presents great susceptibility for change. Therefore, it has been proposed in the application to join these two phenomena, presenting to the time of the good change in decent ethics and decent life.