The Musical Activity of Leon Kubica on Opolian Silesia

The article focuses on the life and musical activity of Leon Kubica, famous church musician of Opolian Silesia. Kubica was a pupil of Tomasz Cieplik, later he continued his musical education at the School Of Church Music at Regensburg. In this very time he became a very recognizable and valued composer. His works were performed by many polish choirs from Opolian Silesia. Kubica himself involved in the works of polish community in German Reich and became a conductor of a few ensembles. Such involvement resulted in imprisonment in death camp in Buchenwald, and later sending him on the eastern front, where he died.

Recent studies based on press, composer’s legacy saved in his family’s possession, and in national archives allowed to complement his biography, mentions about musical activity in polish society of Opolian Silesia and list of his works performances up to 1939. In the last part of this article the brief analysis of his Msza polska, his most famous composition. 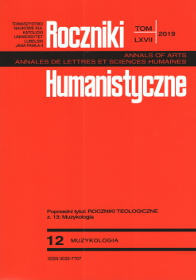