Selected Aspects of Religiosity among Youth in Slovakia and the Netherlands

It is crucial to understand the religious ideas among youth, to set up the adequate pastoral practice. The study presents current trends in the measurement of religiosity and the perception of religion among public. At the same time, it deals with the research focused on the religiosity among youth in Slovakia and the Netherlands. The research is based on quantitative data and in the same time on result of focus groups in both countries. In addition to evaluation of selected indicators of the research sample, the study presents some differences in religiosity among youth.

Pearce Lisa, Denton Melinda L.: A Faith of Their Own: Stability and Change in the Religiosity of American Adolescents. New York: Oxford University Press 2011. 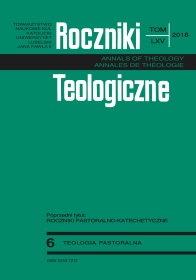