Submitting of the articles for publication in "Roczniki Teologiczne"

We would like to kindly inform you that from September 1, 2020, our website and OJS system will receive full functionality, including submitting articles for publication. From that day on, we kindly ask you to submit all materials for publication in "Roczniki Teologiczne/Annals of Theology" only via the website and the OJS system. 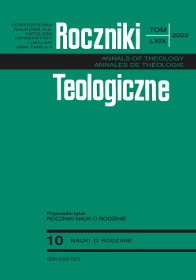 In 2014 restoration of previous concept, as a single and consistent journal with the former title - Annals of Theology, was carried out. The new annals were received a new ISSN and previous volume numeration granting the continuity of numeration. At the moment, the new Annals of Theology appear every month and each of them are dedicated to a specific discipline of theology.