The level of the inhabitants of the village of Zacisze is above average. The people accept such truths of the faith as the existence of God, life after death, after-life accountability, and such typically Catholic truths as the divinity of Christ, Christ’s foundation of the Catholic Church, the pope’s authority in the matters concerning salvation as given by Christ in 89 to 97 per cent. The social life of the villagers is mainly centered around their parish, although they are less acknowledged with the life of the Church in Poland and in the world. Their religious attitude is largely ecumenical; in their majority their attitude towards other denominations is positive although other studies (Chlewiński 1980) have shown that actual contacts with members of other denominations are rare. The study also proved the existence of the stereotype „the Pole-Catholic”. 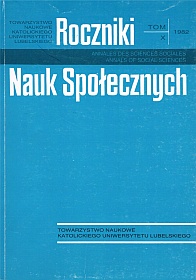