Keywords: Philostratus the Elder; Stoic theory of the work of art; Strabo; Geographica

The article’s premise is a Stoic-based idea of the work of art, featured in the Eikones of Philostratus the Elder. The pair of authors examines the issue of whether, and to what degree, Strabo (himself also an adherent to Stoical philosophy) shares similar views on the work of art, or whether he is partial to the view prevalent in ancient Greece, which consisted in a kind of naïve awe at the execution of ideal likeness (as exemplified, for instance, by the approach of the heroines of Herondas’ mimiambus IV).

A thorough analysis of all descriptions of works of art contained in Strabo’s work leads to the conclusion that Strabo’s was not impressed by “barbarians’ art”. In fact, he begins to pay any attention to works of art as late as in Book 8, describing Greece’s sundry lands. Strabo’s views on the work of art fall into the following categories: 1. a mere note of the object combined with a description of its single feature, usually its size; 2. a thoroughgoing description of works of illustrative character (an antique Biblia Pauperum); and 3. a description of peregrinations of works of art after the latter were seized by the Romans. The last category appears to be of particular interest to Strabo, perhaps due to his view that the Greeks were culturally superior to all Romans (see Daniela Dueck, Strabo of Amasia, London and New York, 2000).

In conclusion, it appears that Strabo was a dilettante in his reception of the works of art. No element of his views can be construed to prefigure the later Stoic theory of Philostratus the Elder. In Strabo’s work, the works of art serve to adorn the world and to vivify his often very dry geographical descriptions; their existence was made merely to exemplify the superiority of the Greek spirit over the remaining world.

The Geography of Strabo with an English Translation by H. L. Jones in eight volumes, London: Harvard University Press 1917-1932 [i wyd. następne]. The Loeb Classical Library. 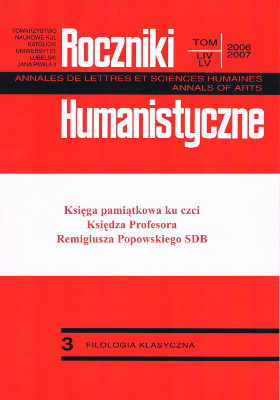