The article does not cover all the major linguistic properties of the play; for example, it ignores the organisation of the text in its various communicative planes. The author concentrates on identifying the characters' basic medium, which in Norwid's words was to be ‟refined colloquial dialogue”. She distinguishes three main stylistic strata of colloquialism and brings out the special role of the medium colloquial style. This was a style used in the 19th century and saturated with expressions typical of the social elite of the time. Still, individual properties of the characters' language result in stylistic differentiation, with the style of the Durejkos being the most distinctive. Because it abounds in philosophical terms, which commentators have claimed are borrowed from Trentowski, the author investigates their genesis and concludes that they in fact do not fully reflect Trentowski's usage.

In analysing various methods of enrichment of the semantics of the dramatic text T. Skubalanka pays special attention to the mechanisms of linguistic generalisation, i.e. the construction of poetic meta-commentary on the phenomena depicted. 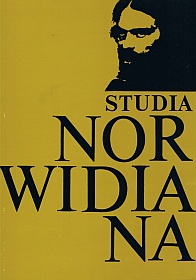