A half-way revolution. On the edition of Norwid’s artistic prose by Rościsław Skręt

The article is a review of the first volume of the critical edition of Norwid’s prose developed by Rościsław Skręt. The review focuses on the choice of works for editing and print, on establishing the status of source texts, determining the form of the texts for print, performing language modernization and associating the textual material with iconography. Examining the actions undertaken by the editor in all these dimensions, one can put forward a claim that his work tries to follow two contradictory editorial directions. The editor developed an innovative canon of Norwid’s prose and managed to avoid mistakes made by his predecessors. At the same time, one can observe that the editor restrained himself from departing too far from the solutions adopted by the previous editors. This latter tendency is particularly evident on the linguistic plane. Hence, one can describe the reviewed edition of the text as a half-way revolution. 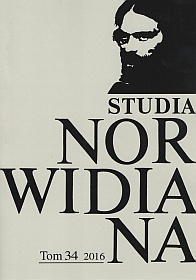