Of all the truths of faith and Christian life the truth about God in the Trinity of Persons is the most basic one. The truth in its entirety is revealed by God, but the interpretation of it has a long human history. The Christian teaching about God as a Trinity is the most perfect expression of human religious and theological awareness. The history of the Trinitarian dogma is as long as Christianity itself. It is rooted in the Old Testament, which spiritually and mentally prepared people for the revelation of the Holy Trinity in the New Testament. Jesus Christ in a comprehensive way revealed the truth about God as a personal triad, as a Holy Community, as a personal communion mystery. The essence of this truth has its source in the whole event of Jesus Christ, that is in His eternal existence, in the history of Redemption and in His word. Only later was it defined as a peculiar revelation of God that allows experiencing His essence, translating itself into existence, into everyday life, spirituality, morality, Christian practice, and with years also into the religious doctrine. Modern Catholic Trinitarian theology is developed on two merging planes; that is, the teaching of the Magisterium and teaching of outstanding theologians. A return to the historical-salutary understanding of God’s Trinitarian mystery, but considered in the personalistic light, is a characteristic novelty of modern trinitology. It is a personalistic-communion approach. Many Catholic theologians think that the Trinity makes itself present in a man by way of grace; it is the charitological approach. Also the problem of the Trinity that is immanent to the world, and at the same time transcendent, is considered. The position suggested by K. Rahner is right here: the historical-salutary Trinity is identical with the transcendent Trinity. The truth about the Holy Trinity is fundamental and basic for the understanding of man himself, of the meaning of his existence and of the meaning of the existence of anything. The Holy Trinity is the original model and at the same time a task for any human community – that is, any kind of human community should be realized according to the model of the Divine community. 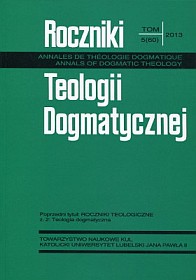