Stephen Castles and Mark Miller have defined contemporary times as the age of migration. Similarly, in Poland labor migration that was intensified after Poland had joined the European Union, is a phenomenon forming numerous social processes. Poles' migrations share the general tendencies: globalization, acceleration, diversification and feminization. They have many consequences for marital and family life. One of them, that is the cause why other consequences occur, is stress. The present article tackles the issue of strategies of coping with stress used by the spouse of a labor migrant, who remains at home.

The article consists of two parts. In Part One the specific character is presented of labor migrations after Poland had joined the European Union. The results brought by migration are sketched on the family and social planes. The effect of separation caused by economic factors on the marital bond and on the family life is emphasized. Among the many consequences also stress is mentioned, that is characterized from the angle of the migration process, starting from the decision about the trip, through successive “visits of the migrant at home”, to the consequences of the long absence in the relations with the wife/husband and with the children. The significance is emphasized of the choice of certain strategies  of coping in the situation of a series of stressing events started by migration. In view of the fact that the problem had not been made the object of academic considerations before, research was conducted that aimed at describing the way that the selected traits in the spouses of labor migrants influence the choice of strategies and particular ways of coping. Hypotheses and research questions were formulated, taking into consideration such variables as sex, education, length of marriage, and the connection of these variables with the strategies of coping with stress. In order to verify the hypotheses and to answer the questions two research tools were used: a demographic questionnaire and the Ways of Coping Questionnaire by Richard S. Lazarus and Susan Folkman.

Part Two of the article contains a description of the methodology of the authors' own research, as well as an analysis and interpretation of the obtained results. On the basis of the demographic questionnaire the population of the spouses of labor migrants who remain at home was characterized, as well as the difficulties that the subjects consider troublesome in the situation of separation caused by economic factors. In the summing up of the article the conclusions are included that may be a basis for planning family-marital counseling in the situation of labor migration. 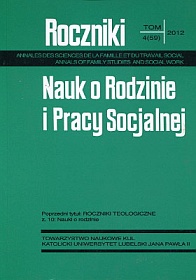