The Metaphysical Argument for God’s Existence

In this paper, I present main theses of Aquinas Way to God: The Proof in the De Ente et Essentia by Gaven Kerr. The book in question is a contemporary interpretation and defence of Thomas Aquinas’s argument for the existence of God, based on the real distinction between the essence of the thing and its act of being. I stress the fact that Kerr underlines the metaphysical character of Thomas’s argument and the role of participation in Aquinas’s understanding of the act of being. In the last part of the article, I discuss Kerr’s interpretation of Aquinas’s argument for the real distinction between essence and an act of being, as well as Kerr’s own argument. These arguments are of particular importance since they provide metaphysical presuppositions for the argument for God’s existence considered in Kerr’s book. As for the first argument, I argue that the first part of Aquinas’s argumentation (the so-called Intellectus Essentiae Argument) pertains to the real order rather than conceptual. Concerning the second argument, I attempt to highlight the difficulties of Kerr’s understanding of Thomist esse as a principle of the existence of a thing. 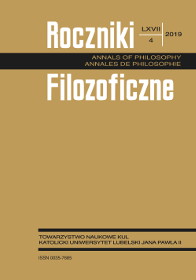