The Truth and Certainty as Nodal Categories in Jaime L. Balmes’ Epistemology

In Balmes’ philosophical thought a significant – it seems – co-dependence is revealed, a peculiar logic of consequence that is sketched already in the starting point of his eclectic philosophy. First it is being given in purely common-sense, popular cognition (it is not quite the realism that is presented by St Thomas Aquinas, although Balmes clearly sympathizes with him). From this common-sense background (which is the influence of Reid’s thought) Balmes’ epistemology stems (here, in turn, Cartesian and Leibnitzian origins of his thought are revealed), whose foundation is not consistently realistic, either, and it rather tends towards philosophy of consciousness (philosophy of the subject). And finally, a significant role is played here by Balmes’ concept of the truth – ontic (the concept of being) and logical (epistemology). His discourse is unified by the concept of God as the first Cause of beings, the ultimate source of clarity and certainty of cognition, the ultimate justification (objective and subjective) of the obviousness of the truth, and in the end – the aim, to which the world of things and persons is heading. So, the basic categories of Balmes’ whole neo-scholastic epistemology are “the existence of God” as, in fact, the only guarantee of the truth and certainty, and “human consciousness” as a necessary condition of the possibility to recognize various types of obviousness. 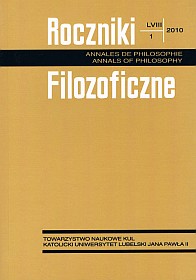