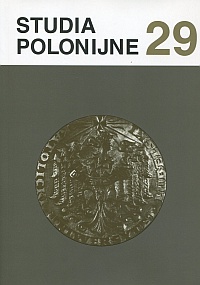 After the end of World War II many Polish families started settling in the western part of London, in a relatively cheap industrial district of Ealing. It was there that on 21 May 1950 in the English St Benedict Church the first Holy Mass for Poles was said, according to the order of the Rector of the Polish Catholic Mission in England and Wales, Władysław Staniszewski. This was the beginning of the Polish parish in Ealing that was called Polski Ośrodek Katolicki (POK); in English – The Polish Roman Catholic Community. The Parish Committee coordinated organizational and pastoral activities in the developing community in cooperation with the parish priest (the office was held first by Rev. Adam Wróbel, and then by Rev. Henryk Kornacki, Rev. Tadeusz Urbański and Rev. Marian Walczak); and the house at 6 Mount Avenue served as the presbytery and the Parish House.

In 1965 the parish was taken up by the Marian order and Rev. Władysław Honkisz became its parish priest (1965-1981). According to Cardinal Stefan Wyszyński’s intention the parish received the title of the Blessed Virgin Mary the Mother of the Church Parish. A greater number of priests, a rapid and extensive development of pastoral groups and social organizations, as well as a growing Polish community in Ealing made it necessary to buy a new building for the parish in 1967 – it was a house at 1 Courtfield Gardens. The Holy Mass was since then said in the Benedictine Abbey, in the POK building, and – starting from 1968 – in St Matthew Church shared with the Anglican congregation. The years 1964-1985 were a period of rapid development of the Ealing parish that in 1974 numbered about 5,000 members. More pastoral groups were established. The cooperation between the Board and particular Sections, the Pastoral Council and the priests resulted in many pastoral, cultural and social initiatives. They also constantly kept in touch with the hierarchy of the local Church and with the British authorities.

A new chapter in the history of the parish was started with buying, thanks to the parish priest Paweł Jasiński’s determination, an old church at 2 Windsor Road in 1985.

At the area of the Blessed Virgin Mary the Mother of the Church parish more than forty pastoral groups and social organizations worked. In the years 1984-2000 the office of the parish priest was held first by Rev. Czesław Pisiak and then by Rev. Kazimierz Grzymała. A solemn jubilee in 2000 closed the half century of the existence of the Polish Roman Catholic Community in Ealing.

Most read articles by the same author(s)