Between the Revelation and Contemporary Culture. Selected Methodological Issues

One of the so-called general sources in moral theology are the views and beliefs of people, which are in a close relation with the cultural conditions of their existence. Moral decisions, attitudes and factual acts always betray their underlying „cultural” roots, that is those related directly to the currently accepted and promoted visions of the human being, the society and the world. Living within the realm of their culture, humans accept it to some extent and through their acts, they express the moral awareness of the époque. When reflecting upon the human beings and their acts, moral theology cannot ignore these factors. However, moral theology seems to be troubled by these factors. Underestimating the so-called cultural determinants draws moral theology towards the position of anti-rationalist Biblicism. On the other hand, an excessive emphasis on the cultural factors leads - in extreme cases - towards the undermining of the traditional teaching of the Church on the following issues: the sources of morality, the acts which are immoral by nature and the existence of objective moral norms.

In practice, the use of the particular sources is always subjected to the holistic vision of moral life, its sources and aims, and to the holistic conception of moral theology. Hence, the role that one is likely to define for the cultural sources will ultimately depend on the more general methodological assumptions adopted by the researcher. Also the opposite is true: the way in which the cultural sources are dealt with imposes a specific meta-perspective on one's research. Thus, the Biblicist approach to moral theology leads to a complete exclusion of the social, historical or cultural determinants. All attempts to classify this branch of knowledge within the so-called Human Sciences make the general sources supreme, and sometimes makes them the sources. Cultural phenomena become the only determinants of moral evaluation in all aspects of ethics, and only on the level of ethos, that is the current moral practice. If the sources and the aims of moral life are only seen on the natural plain, the cultural sources will naturally find its place in the argument. If the sources and the aims of moral life are believed to be supernatural, the cultural sources will only be of relative and limited use. Also, the position that moral theology defines for the cultural sources depends on the method it adopts. The so-called positive method confines itself to the interpretation of the Biblical data. The cultural sources only play the role of some kind of „prolegomena” to the real debate. Their analysis, usually presented in the introduction, helps better understand the Revelation, while the latter is analysed with no reference to the general sources. The systematic method, on the other hand, consists in relying on combined premises. Under this approach, the cultural sources constitute supplementary material – an auxiliary premise and an illustration for the argumentation based on the Revelation.

Retaining the coherent identity of the Catholic moral theology calls for an integral approach to, and the hierarchical organization of all sources. The so-called cultural sources are of limited use to it: they are incomplete and imperfect. They are not the primary, nor the only determinant of moral good or evil. They also fail to give the complete answer to the question of good. This answer only comes through the Revelation. This is why a moral theologian is obliged to unveil textually embedded moral obligations, which God imposes on the human being, here and now – thus, also in all the complex cultural circumstances of the actual life of each of us. This textual embedding may make it difficult for the readers to discern the vital aspects of the God's moral message contained in the Revelation. 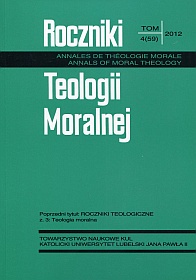