Ecclesiastical Schism in the Town of Gądków Wielki

In the period between 1963 and 1968 there was an “Independent Autonomous Roman- Catholic Parish” under the protection of State authorities in Zielona Góra as well as security service. The initiator of this schismatic parish was Father Czesław Szczukowski, who was appointed vicar-adiutor by the Curia in 1963, thus superseding the former, unpopular parish priest Fr Barański. However, the popularity and conflicts with the former parish priest led to his dismissal. Fr Szczukowski could not come to terms with this fact and he caused a split in the congregation of the Gądków parish. The local communistic government took advantage of the resulting situation and, with the help of security services, initiated the creation of an “Independent Autonomous Roman-Catholic Parish” in Gądków Wielki in 1963, which was registered and maintained on the initiative of Department of Religious Affairs of the Voivodship National Council in Zielona Góra in cooperation with the regional security office and the governing Workers’ Party. Yet the eagerness and imagination of the priests delegated by the Gorzów Curia and their initiatives which went beyond the normal scope of parish ministry as well as problems with the morality of the rebellious clergymen all led to a slow decline of the schismatic parish. All actions of the communist authorities in order to maintain the schism were fruitless, especially that the very initiator, Fr Szczukowski, entered into a civil marriage, distanced himself from the schism and reconciled with the Catholic Church, baptizing his child, yet being subject to ecclesiastical penalties as a suspended priest. Eventually in May 1968, the “Gądków experiment” failed and the faithful reunited with the Roman-Catholic Church. Father Szczukowski permanently joined his life with Cornelia Twarda, raising their offspring and regretting his acts of the past, trying to do penance for them by lending help to the Church and the Gorzów clergy. 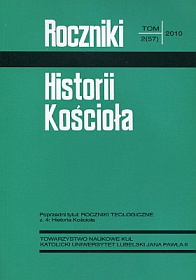